Evaluation of the test indents is performed in the DuraVision G5 series with fully automatic brightness control and fast autofocus. The test load is applied using the proven concept of closed-loop control – the force is thereby continuously and precisely monitored by electronic force measuring sensors. Motorised cross slides position the test points with a high degree of repeatability and positioning accuracy, without any operator influence. 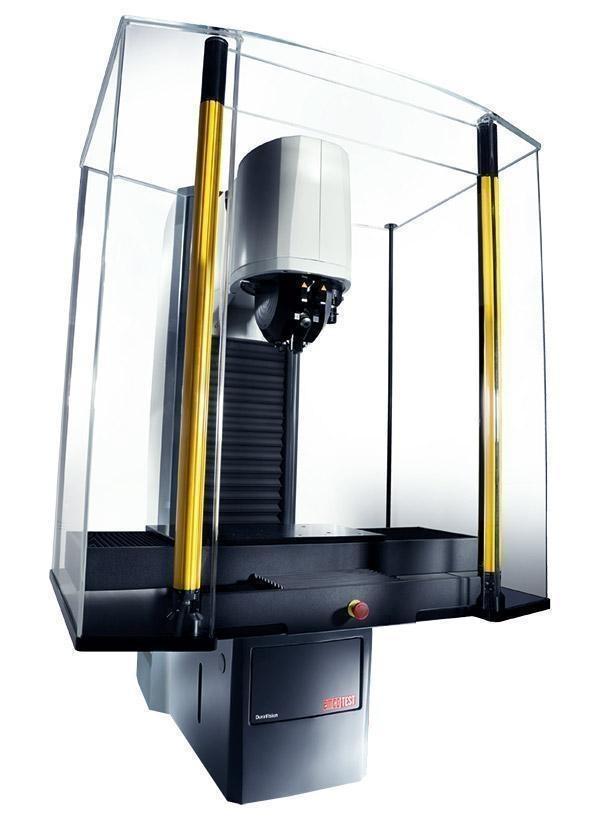 The DuraVision G5 series offers a uniquely broad standard load range from 0.3 kgf to 3,000 kgf, thereby fulfilling the prerequisites for numerous different test methods. Furthermore, intelligent use of the high-resolution 10-megapixel camera allows a 3x zoom without having to accept any loss in image quality due to interpolation. This innovative solution allows a wide range of applications to be covered with a small number of lenses. In order to make full use of this potential, the DuraVision G5 uses only lenses that offer maximum optical resolution. The 7 positions of the star turret also spare you from changing tools.

Whether subjected to a 0.3 kgf or 3,000 kgf test load, the rigid cast iron stand guarantees absolute test stability for the entire range of loads. By using precious components and materials we are also able to comply with North American safety standards (control unit ‘UL-listed’ for the highest standards of fire resistance for plastic covers).

The DuraVision G5 Automatic helps to save time, both in serial testing and in the case of alternating test requirements. Thanks to the new, patented rapid traverse, the height of the nose cone can be adjusted at up to 25 mm/s. Combined with intuitive operation and use of the template function, this enables quick configuration. The high degree of automation of the DuraVision G5 Automatic reduces the active operating time involved in serial testing many times over. The xChange interface included as standard allows the automatic import and export of test parameters and test results and speeds up the test cycle.

Overview camera (optional)
With the help of a “macro lens” featuring a 10x zoom, the overview camera generates a large live image of the specimen, thereby simplifying the setting of multiple test points and complicated test rows – making this an unbeatable tool in combination with the evaluation lenses. 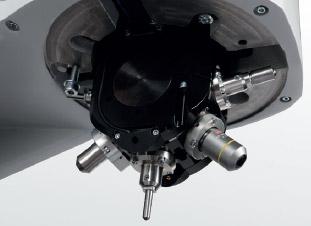 Maximum protection with highest levels of user-friendliness – together with the CE protective housing, the DuraVision G5 meets international CE requirements. The light barrier system means that no safety door needs to be opened in future in order to access the machine's testing area. User-friendliness is therefore increased without compromising safety. In countries where the CE label applies, the machine may only be supplied with the protective housing. For the purposes of automation, the DuraVision G5 is also available outside these countries without a protective housing, in which case the machine is supplied without a CE label.

Serial testing with the DuraVision G5

The test point editor allows test points to be easily set up in a grid. It is also possible to set up each individual test point by entering coordinates. An even more elegant solution for serial measurement is provided by line and polygon line tools. Test series can be automatically adapted to suit work piece contours. Compliance with standard defined test distances is also enabled by an integrated tool (i.e. point distance = 3 x diagonal).

Several test points or rows can be fixed very simply to a defined reference point and saved as a template. Later, this template can be easily placed over the new work piece and exactly positioned by rotation over the reference point.

If several work pieces with the same test requirements are placed and tested on the cross slide, the DuraVision is able to show the full range of its skills. All test parameters are taken from the existing template and transferred to the new work piece.

Even simultaneous serial testing of multiple specimens with different heights presents no problem at all for the DuraVision G5, whether with or without nose cone. 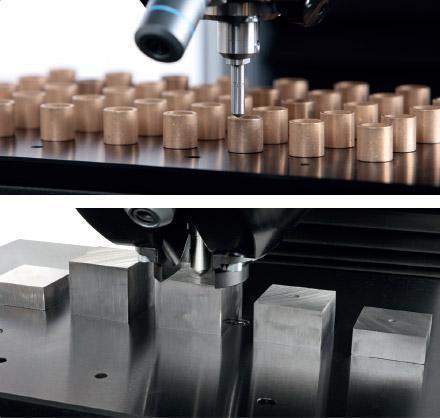 The overview camera captures a specimen size of 180 x 145 mm and is equipped with a 10x zoom. This makes it very simple to position individual test points – as well as complex test sequences and test patterns – in the real-time image of the overview camera. With the unique panorama function, it is also possible to set all test points in one operation, even on larger specimens. The maximum specimen size is limited only by the travel ranges of the motorised cross slide. The specimen image from the overview camera can be inserted into test reports or archived on the company network.

Jominy end quench tests have never been quicker or easier! With a separate software module, ecos Workflow CIS also guides the operator in the customary manner, step by step, to the result with Jominy specimens. The operator has a choice of two options for Jominy testing – standard-compliant or user-defined. For the standard-compliant test, operators choose between HV 30 and HRC test methods in accordance with EN ISO 642 and ASTM A255 respectively. All the test parameters, including test point spacings, are predefined and guaranteed standard-compliant.

For the user-defined test, operators can design the testing of Jominy specimens freely according to their requirements. All test methods are available for selection, and users can define their own test point patterns and spacings. Furthermore, multiple parallel test sequences can be created on one test surface. Single specimen holders are used for performing Jominy tests. The Jominy specimen holders can be combined with one another, thereby enabling up to 18 specimen holders to be placed on the cross table. The result is described clearly with all hardness values in a standardised test report. 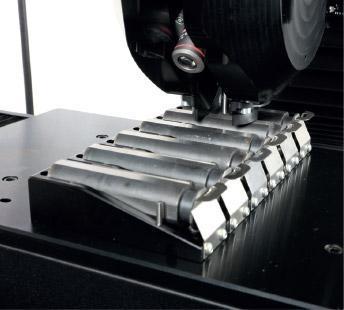