What is Mechanical testing?

Mechanical testing is a method of determining a material's mechanical characteristics. It can be employed to analyse a material regardless of its geometry as well as under specific geometrical circumstances. When analysing a material, a diverse wide array of mechanical assessment procedures can be used, which may even indicate the suitability of a material disposed to its ageing.

Why is Mechanical testing important?

Mechanical testing is a crucial aspect of the product design and production process, and testing operations can be provided in-house or by third-party testing laboratories. The basic goal of mechanical testing, irrespective of where it is performed, is to maintain the integrity of any finished goods or buildings. As a result, environmental factors are critical, and tests should be carried out in conditions identical to those encountered by the finished version.

The specifications for every testing or assessment are normally indicated on the designs for each item, implying that screening is the obligation of the producer of every component. Mechanical testing, in addition to having security consequences, can also guide cost-effective design and aid in technical advancement. Designers and production staff can conduct such assessments to certify innovations and enhance production performance. These tests can potentially be utilised to reduce the likelihood of unforeseen events and as support of a failure inquiry.

The test is performed by applying a specific load to the materials using an indenter and checking the plasticity of the material, its deformation and crack behaviour after a particular time duration called the dwell time. The nature of the indent depends on the indenter, dwell time, and the load applied via the indenter.

The indentation shows a mark on the surface of the tested material. This mark is measured using appropriate measurement tools and the hardness values are calculated using a specific formula for the testing type.

The repetitive loading of material within the limits of yield strength causes fatigue in the materials. Every material can bear small loads for a certain number of cycles and then they fail due to fatigue.

The tensile test is performed by clamping the material in a standard form which might be a cylindrical dog bone shape or a sheet-like shape and elongating the material in the length direction. Previously, simple mechanical loading machines were used for testing, but nowadays, computer-assisted modern digital equipment is used for tensile testing that applies for an extension at a provided rate and measures the load generated on the material. The computer converts the measured extension and leads to strain and stress by comparing it with the dimensions of the testing samples. The results are recorded and interpreted with the help of a graph. Testing standards - ASTM E8, D638, and E8-M are the most applied tensile test standards. 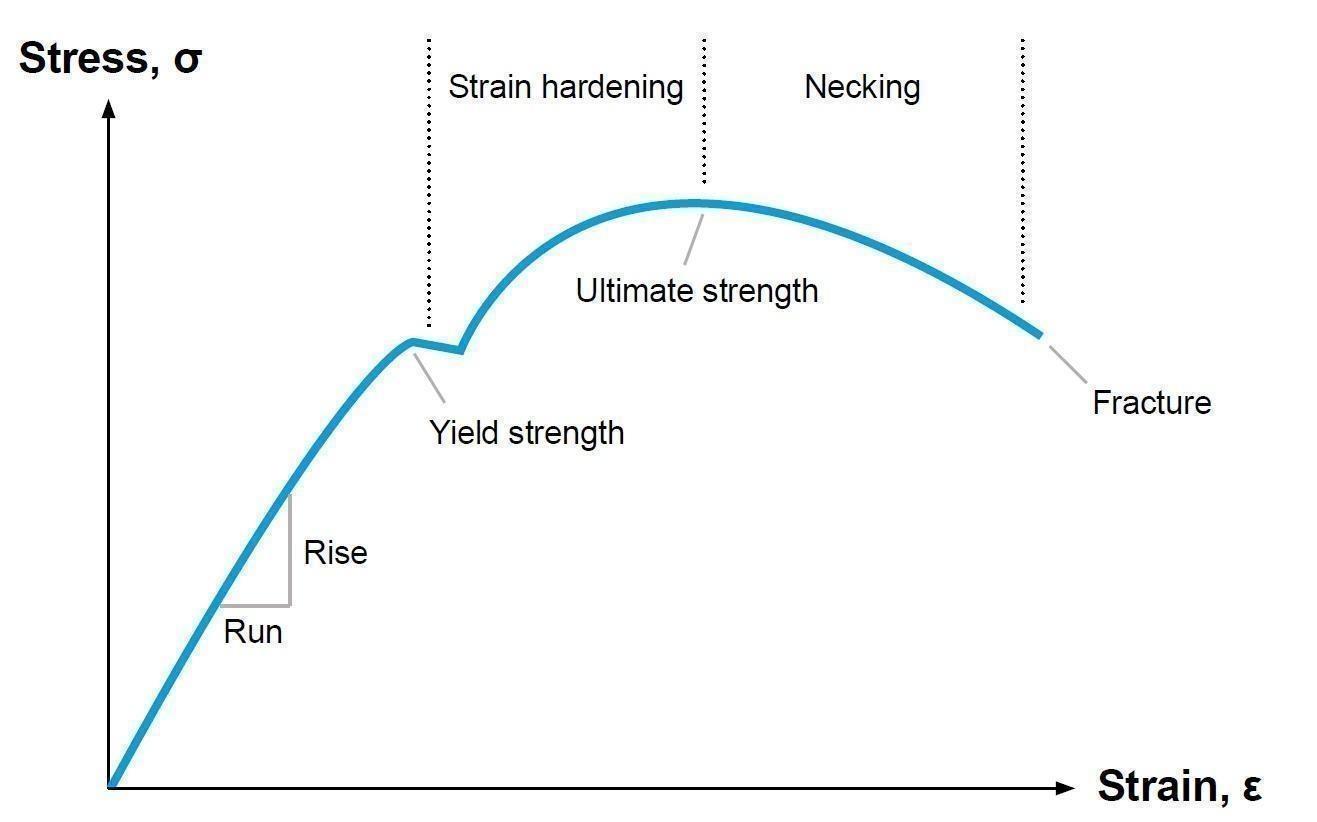 Compression testing is the reverse of tensile testing where a cylindrical sample is compressed using mechanical forces, and the compressive mechanical properties are measured. The sample is permanently deformed as a result of testing this, so this testing method is classed as destructive testing. The result of compressive testing is similar to tensile testing however the curve starts to rise after the plastic deformation of materials, while in tensile testing the curve falls towards lower stress values. The properties obtained from the curves are similar to tensile tests. Testing standards - ASTM E9, ASTM D638, ASTM D638 and ASTM D 695 are the popular compression testing methods which are widely applied in industries. 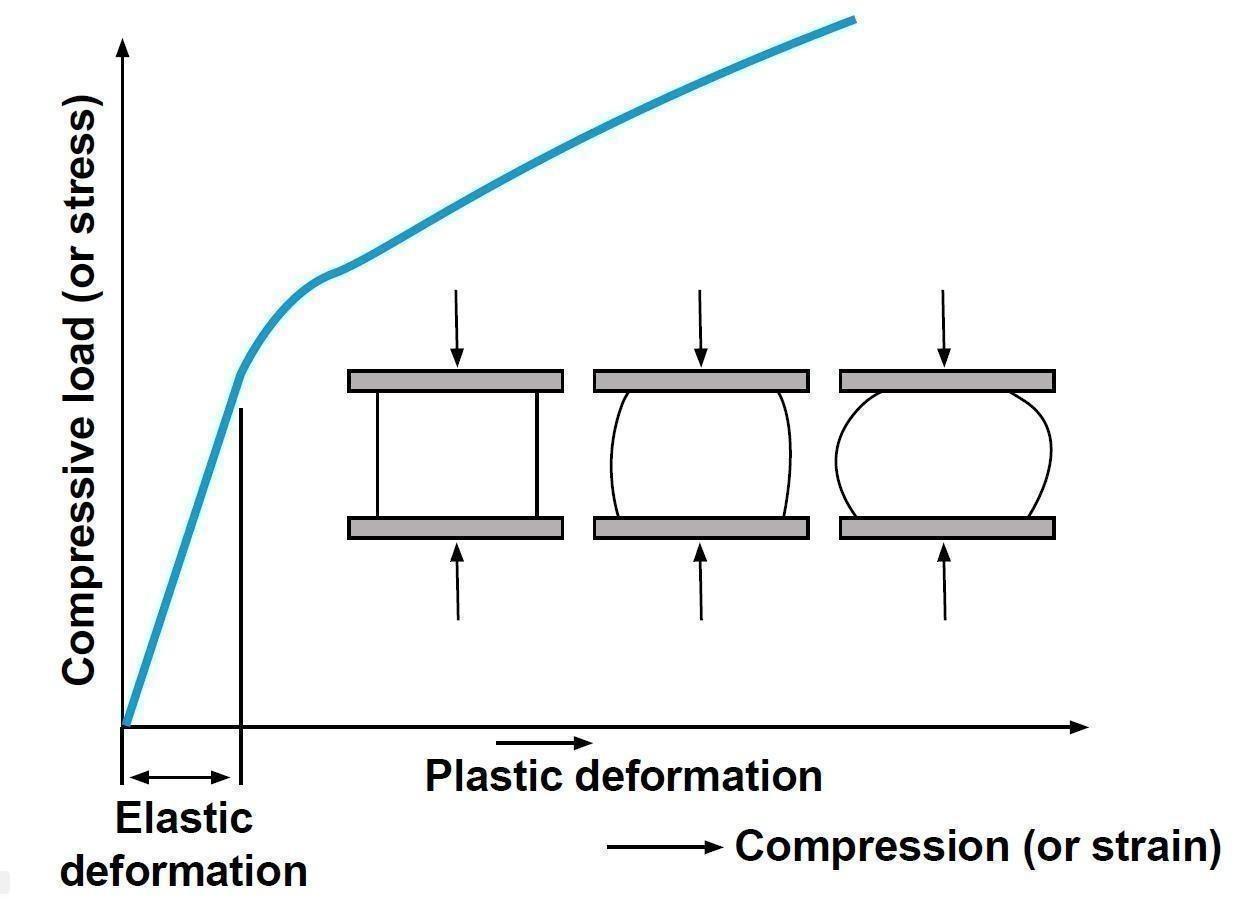 The deformation in creep occurs in three phases. In the transient or primary phase, the rate of strain corresponds to the time. The second phase is also called the steady-state phase as the strain rate becomes constant in this phase. The last phase is called tertiary creep, the strain increases exponentially with the increase in stress due to necking, voids and internal defects. This stage leads to a complete fracture of the material. The same three stages are involved in the creep test specimen. The creep test is performed by applying tension or compressive forces to the specimen for a long period at a fixed but elevated temperature. The deformation values are recorded after regular intervals and the results are represented in the form of a creep-time graph. The creep rate at any interval can be determined by calculating the slope of the curve at that point. Temperature maintenance is crucial during the test to avoid thermal expansion or contraction in the specimen

Creep Testing is classified based on loading and assessment. It is divided into the following major types. 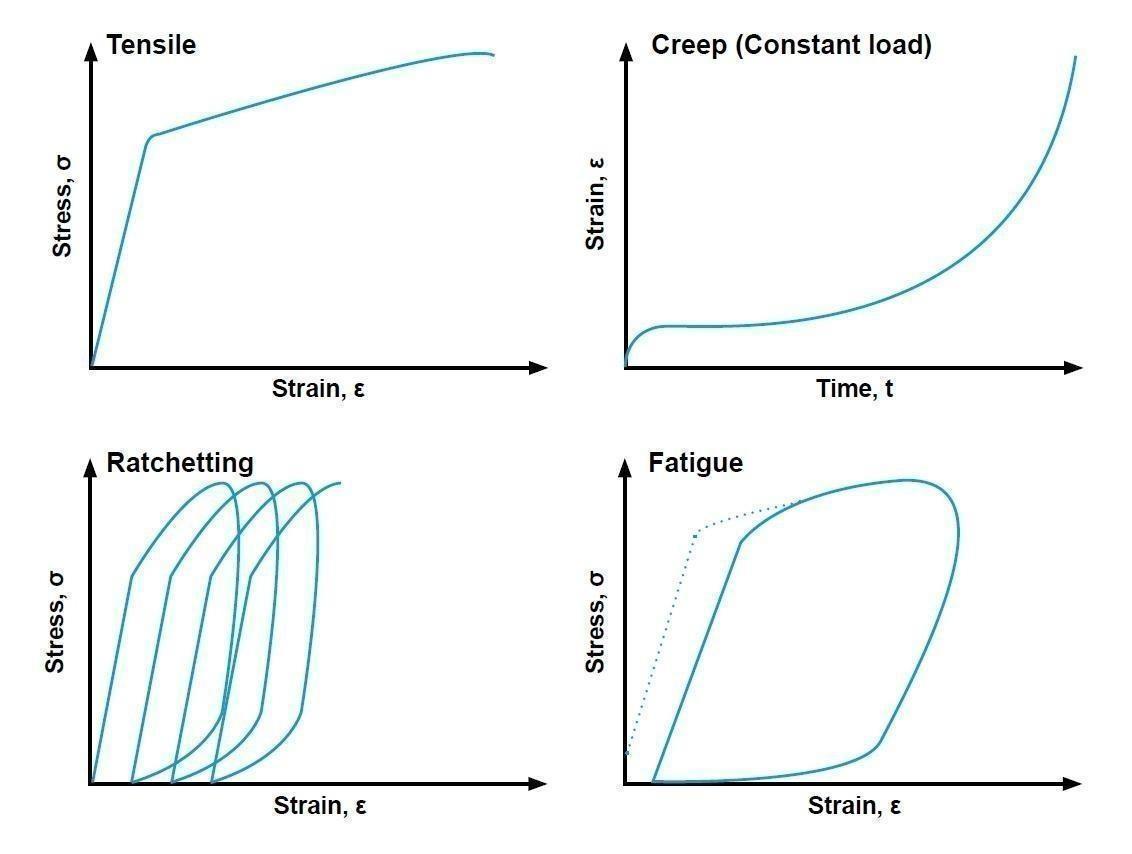 Different types of creep testing and their results

Outcomes of the creep test show that different loading situations are all affected by time and the amount of load placed on a unit’s cross-sectional area of the material. Different zones of creep are identified in the curves by comparing the slopes. Testing standards - ASTM E139 is the famous standard in tensile creep testing.

Engineers employ impact testing to forecast how a material will behave under impact loading situations in real-world settings. Several materials collapse quickly when struck, usually at faults, fractures, or grooves. One of the most typical impact tests includes striking a notched bar with a hanging hammer; heights during impact are employed to calculate the energy necessary to break the bar. Two important types of impact testing are:

These tests differ from each other based on notch direction, notch shape, specimen dimensions, hammer types, striking point and position of the specimen. These differences are illustrated in the following table.

The outcomes of the tests are broken metallic pieces and a recorded value of energy. We need to think about the material’s impact toughness, impact energy etc. Testing standards - Several standards are used for testing and it includes ASTM D883, 12 ASTM D256, ASTM d1248

Indentation plastometry is gaining traction as a possibly useful enhancement to the current testing toolkit. It combines the simplicity and flexibility of operation supplied by hardness measurement with the higher demanding and relevant results anticipated by tensile testing in several respects. The indentation process is fairly identical to hardness testing, except having the loads necessary are much larger than those employed across most hardness studies. The approach relies on continuous FEM analysis of the indentation process. The simulation started with an experimental range of plasticity parameter variables (to the load that was used in the experiment). The calculated and observed remaining indent profiles are then compared. The quantity of a mismatched parameter characterises the output of this assessment. This is zero if the match is perfect, however, any result below around 103 indicates strong consensus.